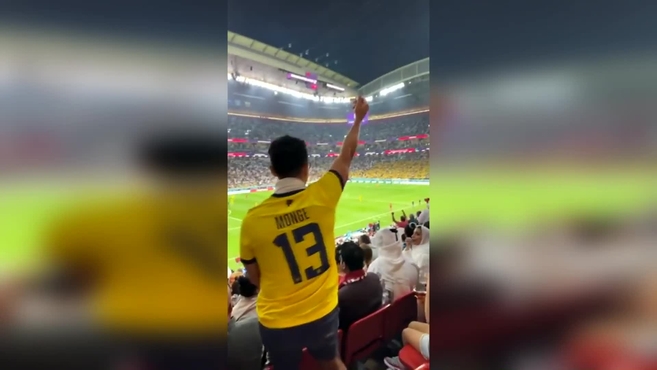 The eyes of the world are on Qatar at the moment due to the 2022 World Cup now being underway. Most, though, are watching with scepticism due to the country’s human rights record and with them being perhaps the most controversial hosts in recent memory.

During their opening loss to Ecuador on Sunday, images from the stands in Doha went viral for all the wrong reasons.

Enner Valencia saw an early goal ruled out for offside and controversy sparked, with few people spotting the problem at first. An Ecuador fan bravely stood up and, clearly joking, gestured to those around him that the referee had been bought by the hosts’ money.

One Qatar fan, though, was not seeing the funny side of things and yelled at the Ecuador supporter to “sit down and shut up”.

The two men later made up though, and posted on social media during the game to highlight the fact, though it did appear that the Qatar fan had asked the Ecuador fan to take part in the video.

“He is an Ecuadorian and he is here to watch the match today,” the Qatar fan, who was previously furious, said.

“In the end we are all here to watch the beautiful game.”

The Ecuador fan joined in and backed up his new friend.

“Yes,” he agreed. “Passion sometimes makes people upset. But we come together for sport. Sport brings people together. ??”So we are very friendly with each other, I wish Qatar the best, and it’s a beautiful World Cup so far.

“You guys are so friendly, I love it.”

Some have joked about his delivery of the last line, suggesting that maybe he was the recipient of something in return for the kind words.