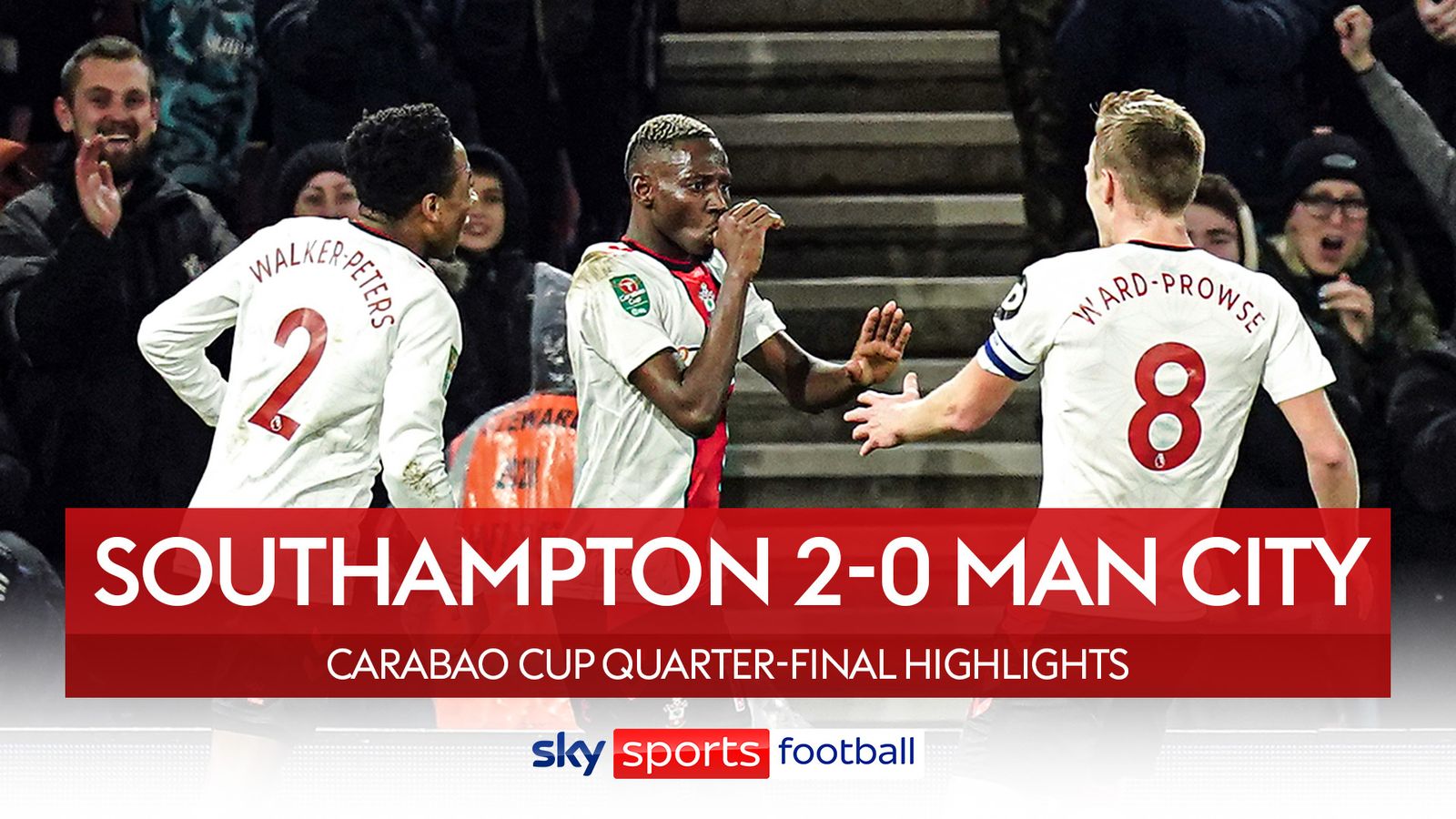 Match report and free highlights as Sekou Mara and a special Moussa Djenepo lob sent Southampton to the Carabao Cup semi-finals; Manchester City failed to even register a shot on target in an underwhelming performance; Southampton will play Newcastle in the semi-finals

Southampton knocked out Carabao Cup favourites Manchester City to reach the semi-finals as Nathan Jones’ side pulled off a remarkable 2-0 win to book a last-four clash with Newcastle.

Saints played with a verve and energy that belied their status as the Premier League’s bottom side and were sent on their way by Sekou Mara’s fine finish after City sloppily squandered possession. Jones’ men didn’t stop there and continued to press Pep Guardiola’s lacklustre side all over the pitch and Moussa Djenepo scored a sublime second with a 30-yard lob that caught goalkeeper Stefan Ortega out.

City finished the game with Kevin De Bruyne and Erling Haaland on the pitch – both started on the bench – but the expected siege on the Southampton goal never materialised as City failed to even register a shot on target in the game.

Such was the ease that Southampton saw out the game, the home fans could even afford to bring the ‘ole’s’ out in the closing stages.

This was the first time a Guardiola side has failed to progress from a domestic quarter-final tie having previously won the last 15, including the last nine since taking the City job.

How the Saints marched all over City…
There was no sitting back from Jones’ side, who played very aggressively and directly to pin City’s defenders back in the early stages. That press set the tone and led to the opening goal. Some sloppy passing from Kalvin Phillips, on his first start for City, and Sergio Gomez was seized upon by Lyanco.

Player of the match: Moussa Djenepo

The Brazilian defender raced forward and delivered a low cross which Mara emphatically swept past Ortega to claim his first goal for the club.

City’s sold-out away end were briefly silenced by the surprise breakthrough and they had serious cause for concern only five minutes later as Djenepo doubled the lead, in some style.

Pep Guardiola made four changes from the FA Cup win over Chelsea and he started Erling Haaland and Kevin De Bruyne on the bench. In came Joao Cancelo, Kalvin Phillips, Ilkay Gundogan and Jack Grealish. Phillips was making his first start for City after injury issues.

The winger showed incredible awareness to spot Ortega off his line and even better quality to produce the finish, curling a fantastic effort over the stranded goalkeeper to put the Saints fans in dreamland.

Guardiola responded by bringing on De Bruyne, Nathan Ake and Manuel Akanji for the second period after his Kyle Walker playing as a makeshift centre-back had not paid off.

De Bruyne almost made an immediate impact but, after his through ball cut open the Saints’ defence, Julian Alvarez flashed wide.

Grealish, subdued on the left flank, was then replaced by Haaland – but City failed to get the ball into their star striker.

His best opening came on 73 minutes when he hooked over a half chance but it was Southampton creating more danger up the other end and substitute Che Adams had an effort ruled out for offside.

It was a night to savour for Jones, who has responded to his critics with back-to-back victories.

Southampton return to Premier League action at 3pm on Saturday when they travel to Goodison Park to take on Everton in a huge bottom-of-the-table clash. Nathan Jones’ side then host Aston Villa at St Mary’s at the same time on January 21.

Up next for Manchester City is a trip to Old Trafford for a mouth-watering battle with rivals Manchester United at 12.30pm on Saturday. They then welcome Tottenham to the Etihad at 8pm next Thursday, live on Sky Sports.