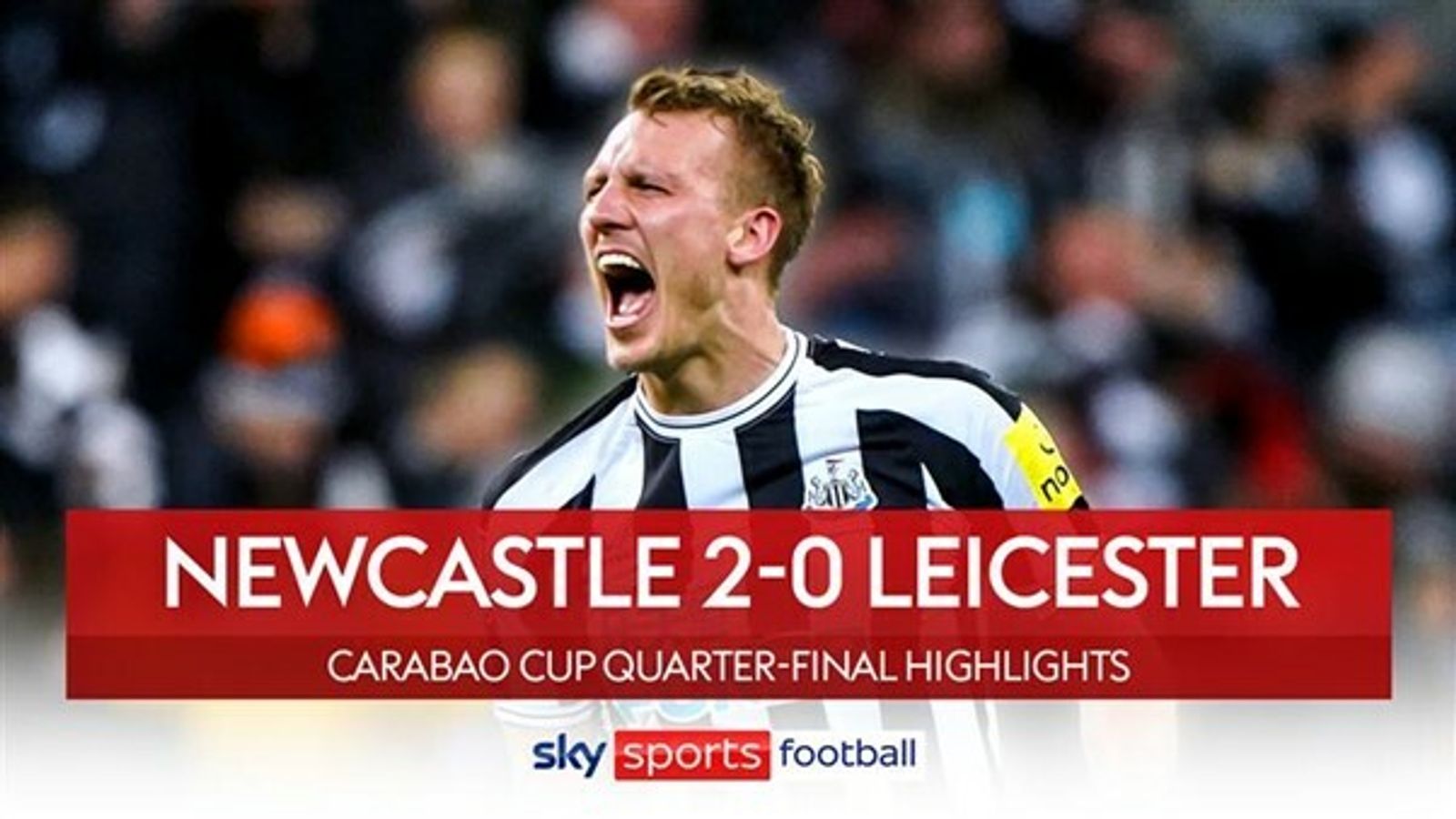 Match report and free highlights as local lad Dan Burn sends Newcastle on their way to the semis with his first goal for the club; Joelinton doubled the advantage before Jamie Vardy inexplicably missed from close range

Newcastle moved a step closer to ending a 54-year major trophy drought with a 2-0 quarter-final win over Leicester in the Carabao Cup.

In front of an explosive St James’ Park atmosphere, Newcastle dominated but took until the 60th minute to open the scoring when Dan Burn notched his first goal for the club.

That lead was doubled 12 minutes later as Joelinton escaped in behind down the left and picked out the same corner as Burn did to rubberstamp the victory.

Leicester, who offered little for large parts without the still injured James Maddison, did create a couple of late openings but substitute Jamie Vardy wasted the pick of them, side-footing wide with the goal gaping from seven yards out.

Player of the match: Bruno Guimares

The win breaks a run of 47 years without making the League Cup semi-final for Newcastle as they look to win a first major trophy since 1969. They will find out their semi-final opponents on Wednesday night – the draw is live on Sky Sports.

Newcastle boss Eddie Howe said of Newcastle’s barren trophy run: “It’s been too long, too long a wait. That’s no criticism of anyone that’s tried, but we’re desperate to hurry up the processes and try to get the team successful as quickly as possible.

“That’s easier said than done, and we now go to a semi-final. Getting to the semi-final is one thing, but you want to get into the final, you want to experience that.

“We know we’ll have a huge test ahead of us whoever we get, but we’re just delighted to be in there.”

How Newcastle edged closer to Wembley…

Newcastle’s raucous home support demanded a fast start and they might have been ahead inside 45 seconds but Sean Longstaff scuffed wide at the back post when it looked easier to score.

The excellent Bruno Guimaraes missed the target after Joe Willock and Joelinton had linked well down the left and Longstaff missed another fine opening when his effort was clawed clear by Danny Ward.

Leicester threatened sporadically with Patson Daka’s decision to cross rather than shoot from the angle proving a wrong one as somehow they got to the break at 0-0 despite Newcastle’s dominance.

Joelinton’s low drive come back off the foot of the post within seconds of the restart as the one-sided feel to the game continued. Burn then headed Kieren Trippier’s free-kick over when he might have done better – but his moment would come.

The full-back, a former Newcastle season-ticket holder, burst into the penalty area from the left and fired across Ward and inside the far post to send the home crowd into raptures.

The roof came off the stadium again shortly after when Joelinton seized upon a Miguel Almiron pass that took Marc Albrighton out of the game. Like Burn, the Brazilian found the far corner with a lovely finish.

Going 2-0 behind seemed to perk Leicester up as they started to find space with Vardy on the pitch but he passed up two glorious opportunities to reduce the deficit in quick succession, firstly spurning an open goal from seven yards out then firing wide from the angle.

This was Newcastle’s night. And how the home fans celebrated.

Guimares was the driving force. He was everywhere. Putting out Leicester fires when they staged a counter and getting on the end of good build-up play from his teammates, although his finishing was slightly lacking. That was the only negative for a player that is going places fast – just like his club are.

“It was a similar feel to the Leeds and Sheffield Wednesday games. We had chance after chance and couldn’t take them. The important thing is not to get impatient and not to overthink things and be too extravagant. I thought we controlled things really well. The goals came at a good time. You are always looking for things to improve.

“Leicester are a transition threat, especially when Vardy comes on. The defenders concentration was very good. At 0-0, we limited them.

“You have to enjoy winning. It doesn’t happen all the time. You work hard for the moments in the changing room and you want the players to savour it.”

“Firstly, congratulations to Newcastle for getting through to the semi-final. I think they deserved to win the game. We lacked quality. We gave the ball away too easily and needed too many touches. We don’t have any arguments. Two soft goals too. We can be better in those areas. But Newcastle were better.

“We had chances. In the first-half we got into good areas. In the second-half we had good opportunities. If Jamie [Vardy] makes it 2-1 in the last 15 minutes of the game it makes it more nervous. We couldn’t quite get the goal to make them feel the pressure.”

Up next for Leicester is a trip to Nottingham Forest in the Premier League at 3pm on Saturday before a home match against Brighton at the same time on January 21.