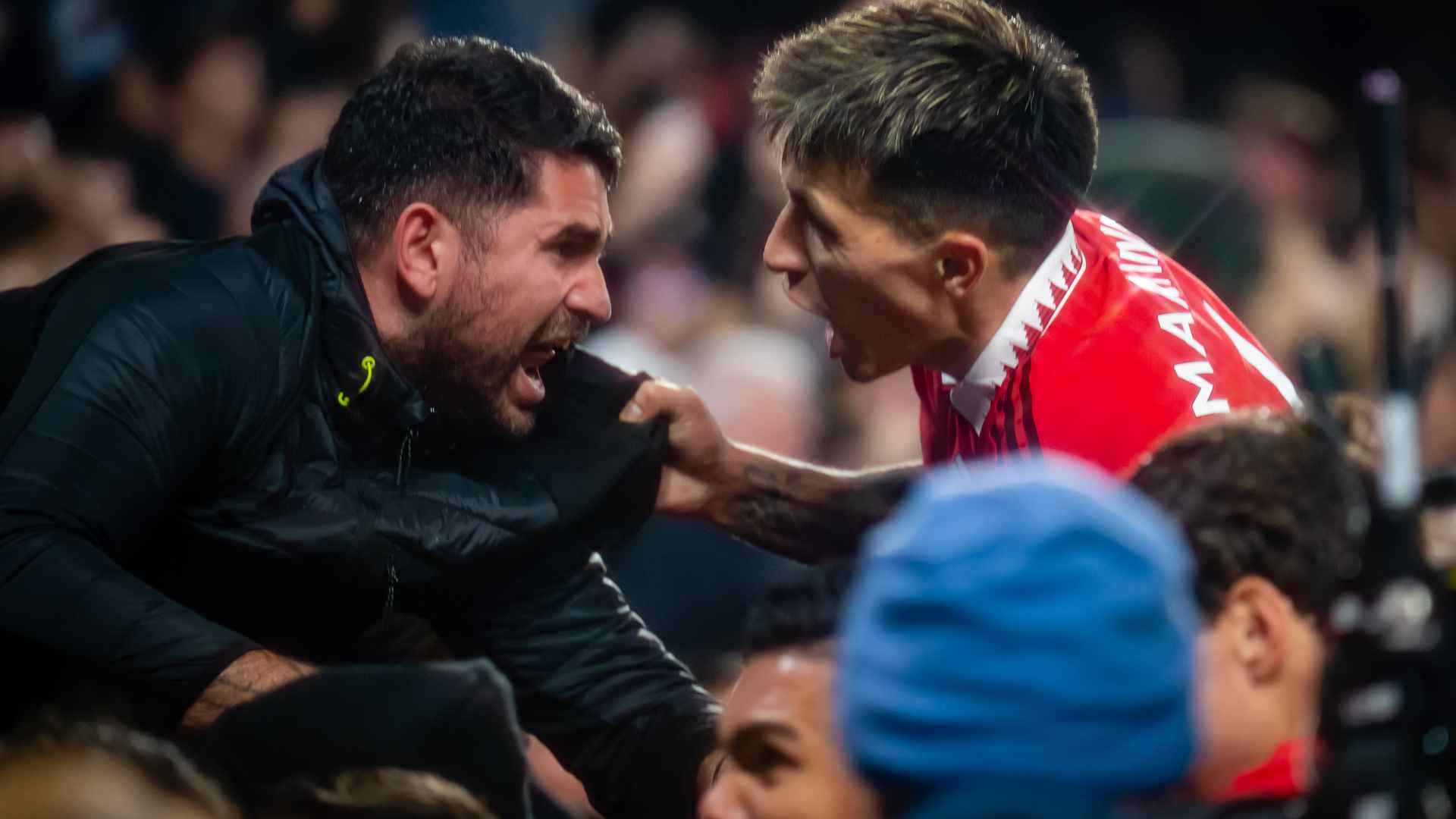 A LEADER OF MEN

But Martinez’s popularity and importance to Ten Hag’s emerging team goes beyond mere characteristics. It’s visible in little moments that are not often noticed by

the TV cameras and the tabloids.

When Bruno Fernandes scored our second goal against Tottenham Hotspur back in October – a performance widely considered United’s best for years – Martinez ran straight into the arms not of the Portuguese, but the full-back usually stationed immediately to his left, Luke Shaw. Together, they then made for Raphael Varane and Casemiro. These are the little moments that strengthen a high-performance culture: a team spirit.

Much has been made of the backslapping and high fives that we’ve seen throughout the early months under Ten Hag. Defending is hard work, of course, but the way Martinez does it seems infectious, and his enthusiasm has clearly rubbed off on arguably more attack-minded defenders like Shaw and Diogo Dalot.

There’s little doubt that this tallies with the United ethos too. The club is famed for its Ballon d’Or winners, its entertainers – Law, Best, Charlton, Ronaldo and many more – but underpinning our success has always been a desire to run longer, tackle harder and fight more tirelessly than the opposition. From Nobby Stiles to Bryan Robson, from Roy Keane to Wayne Rooney, we love those who leave it all out there; those who play like we’d like to, if only we had a scintilla of the required footballing ability.

Mate I don’t know you but we’re in this together… 😅🤜🏻🤛🏻🔴 fighting until the end!!!!! #MUFC https://t.co/SIfxCBuQPP pic.twitter.com/I6GeaRCuw2

And then there’s the relationship Martinez has with our match-going fans. As he left the pitch after the Tottenham win, the player was serenaded with more of those ferocious ‘Argentina!’ chants by the Stretford End. Clearly moved, Martinez told club media: “To be honest, it’s very emotional for me. When I heard the fans singing, I wanted to cry.”

After Casemiro’s dramatic late equaliser at Stamford Bridge, a famous photo was taken showing Martinez and a fan in the away end locked in an intense celebration. It’s hard to put a price on the value of such fan and player interaction.

Perhaps Argentinian players feel a sense of mild trepidation when they decide to move to England. After all, the two countries were in conflict only 40 years ago, well within living memory. But Martinez, like Cantona and many others, has found sanctuary in Manchester, an immigrant city that has a history of embracing and honouring the diversity of those that make it their home.

“He’s the kind of player we’d been waiting for,” says Florencia. “His passion has captivated us all. I love how the fans cheer for him by chanting ‘Argentina, Argentina!’ At first, I remember he was really surprised by that.

“After United’s game against Fulham at Craven Cottage, someone threw him a flag from the away end, and he managed to grab it. It was a very special gift for him ahead of the World Cup.”

Whether that was the lucky charm which swung it for the Albiceleste in that epochal final against France, we’ll never know. But what we do know for certain is that United fans could not wait for Martinez’s return to Manchester. Whenever Lionel Scaloni opted not to start him in Qatar, at the favour of Cristian Romero or Nicolas Otamendi, there was widespread bemusement. For many Reds, there is no centre-half in world football they would rather see at the heart of a defence than Licha.

“Everyone was gutted to see him leave Ajax,” admits Den Breejen, “but we all wanted him to take up this opportunity as well. So, it was a bit of mixed feelings for me. But when players are leaving, I’d rather it was to United than anywhere else.

“In my Ajax-supporting days, we’ve been very spoilt with having local, Amsterdam-born players in our team, and that’s what’s needed to keep the connection to the community. But the favourites are usually the players who came from abroad that just really fought for the club; that really knew what the club was about. And Martinez was one of them. For me, it’s great to see that it worked like that at Ajax and it works like that at United.”

Perhaps that is indeed why the Martinez love affair has ignited so quickly, so passionately, here in Manchester. Because, at their best, football clubs are always an uncanny reflection of the places and the people that they represent.

The man from Gualeguay, Argentina might have learned his trade over 6,000 miles from Manchester, but his underdog spirit, his grace under pressure, his refusal to back down before any opponent, his pure ambition, are 0161, through and through.