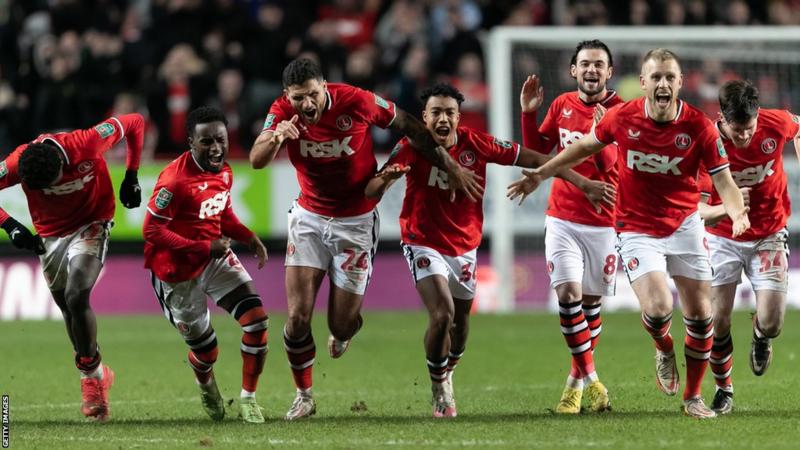 More than 9,000 fans will travel with League One Charlton for Tuesday’s Carabao Cup quarter-final against Manchester United at Old Trafford.

It is the club’s biggest away following in over a decade and, according to those who know the club well, probably their largest travelling contingent for a midweek cup tie ever.

The prize is a huge one – Charlton’s first major tournament semi-final since they won the FA Cup in 1947.

Victory would be a massive shock. Charlton’s last away win at Manchester United was in 1986, when Mark Stuart scored the only goal. Prior to that, their only successes at Old Trafford were both in the 1930s.

Nevertheless, it should be a night to remember.

Sadly for Charlton fans, the game comes at a time of more huge uncertainty around the club.

Broken trust with the owner

Just over two years ago, supporters successfully fought off an attempt by Manchester-based businessman Paul Elliott to buy the club, which they believed would have put Charlton at risk.

In September 2020, charismatic US-based Dane Thomas Sandgaard took over the ownership promising to get Charlton back to the Premier League within five years and vowing to rebuild trust with the club’s fan base.

It hasn’t quite gone to plan.

On the pitch, Charlton slipped to 18th in League One after a 3-1 defeat at Oxford on 29 December. Three weeks earlier, they lost 3-1 at Stockport in an FA Cup second-round replay, prompting the Charlton Athletic Supporters Trust (CAS Trust) to say the club was at its “lowest ebb in living memory”.

Off the pitch, Sandgaard has not provided the investment anticipated. In October, the club’s parent company, Clear Ocean Capital, posted a £6.8m loss for the 10 months to June 2021.

Rumours have been circulating that Sandgaard is trying to sell the club.

Former Charlton chief executive Peter Varney said on social media that Sandgaard has entered a period of exclusivity with a third party.

Former Sunderland director Charlie Methven, meanwhile, has been pictured in the directors’ box at two recent Charlton matches. At Portsmouth, he sat with Simon Lenagan, son of Wigan Warriors owner Ian, who used to own Oxford United.

Asked specifically about the speculation in an interview with BBC Sport before the Manchester United game, Sandgaard said: “There are so many rumours out there, many of which are conflicting, so I would prefer to focus on the football side at this point.”

However, he added: “I am with Charlton for the long term. Don’t worry about that.”

Sandgaard’s plans delayed
The initial issues around Charlton stemmed from the fact former owner Roland Duchatelet still owns the Valley and the club’s Sparrows Lane training ground and is demanding £50m to sell them both.

Sandgaard’s initial hope had been to bring all the sections of the club under his ownership.

But the financial impact of the coronavirus pandemic has created more problems than he initially thought.

“It is no more difficult than I expected; it is just taking longer,” he said.

“Getting into it, right in the middle of Covid, delayed the things by between a year and 18 months in terms of getting into the meat of it.

“It is a long process. I have spent two and a half years primarily turning things around at the club. Most of that has been internal. We have changed a lot of things, not just on the football side but the business side too. There is still one, if not two seasons before we can say that things have been turned around.”

One of Sandgaard’s most recent decisions was to axe manager Ben Garner after less than six months in charge. Garner’s replacement, Dean Holden, has presided over a mini-revival, recording successive victories for the first time since October which has moved Charlton into 12th, nine points away from both a play-off place and the relegation zone. Charlton have not finished lower than 13th in the third tier since 1928.

Charlton fans on ‘high alert’
Sandgaard’s words will do little to ease the tension among Charlton fans.

They believe costs have already been slashed and feel any attempt to reduce them further, either by Sandgaard or a new owner, would mean cuts to the academy budget or the women’s team.

Charlton’s academy has brought through players such as Aston Villa’s Ezri Konsa, West Brom’s Karlan Grant and Ademola Lookman, who is currently playing in Italy with Atalanta. Its women’s team is third in the Championship.

There is also concern at the perceived lack of transparency around a potential sale, in particular source and depth of funding, plus whether there may be an attempt to realise value in the club through some kind of ‘property play’.

Having fought so hard to resist one unwelcome owner so recently, the Charlton fans are preparing for another battle.

The CAS Trust describes itself as being “on high alert”, adding that “scepticism and pessimism” are back on the agenda.

“The memory of the shenanigans of 2020 is too raw for us,” said Cast chair Heather McKinlay.

“Right now, we want to enjoy our big night out at Old Trafford but the lack of transparency regarding the situation and, above all, the future financial security of the club are really worrying for fans.”

Charlton fans will travel north in numbers hoping to see history made at Old Trafford. But there will also be a few glances towards the directors’ box.

Win or lose this week, many of those supporters believe there is a far more important issue at stake: the future of Charlton Athletic.