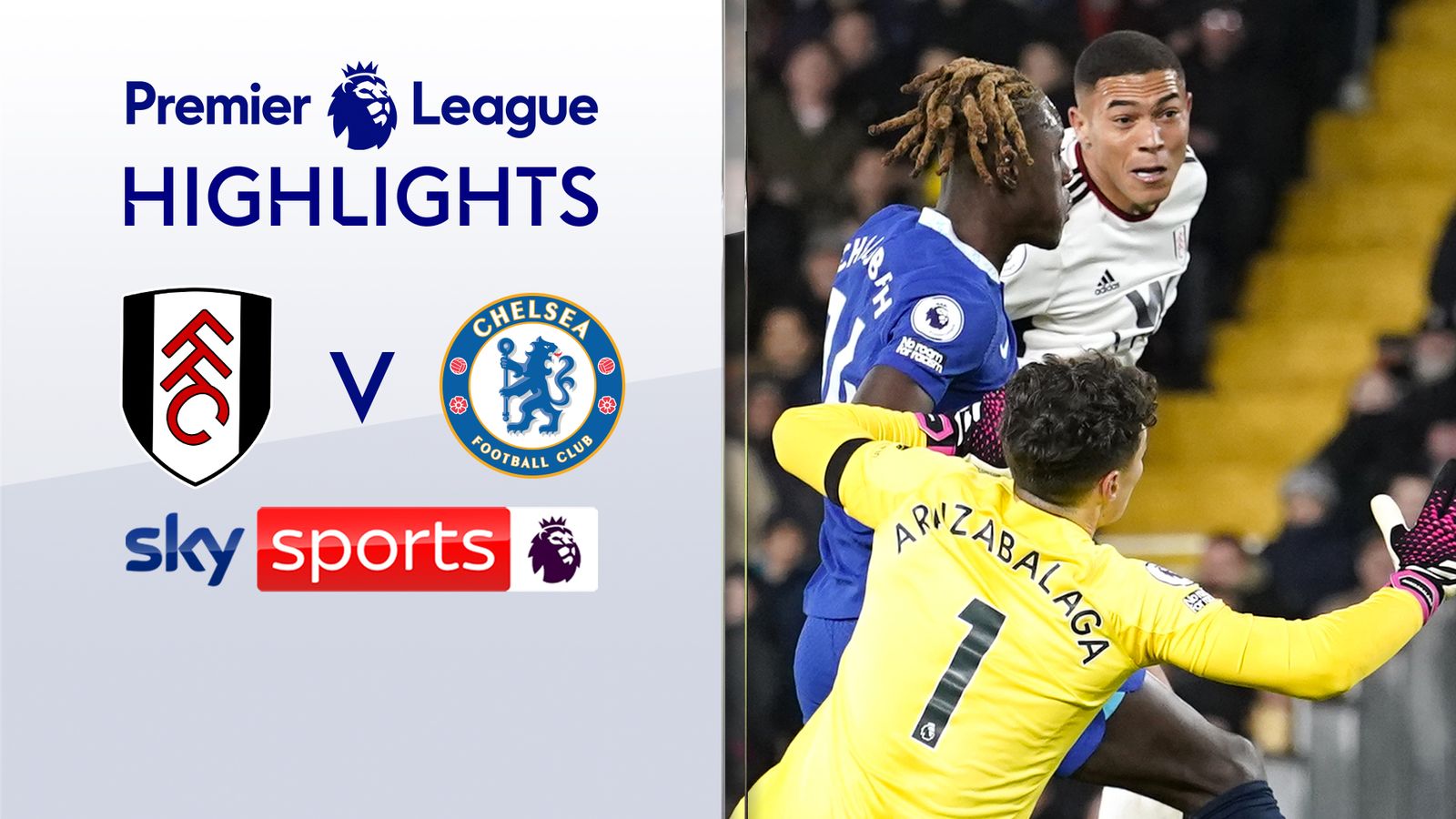 Report and highlights as Chelsea suffer first defeat to Fulham since 2006; Willian scored against his old club; Carlos Vinicius ended his goal drought; Joao Felix sent off after initially impressing on his debut, with Kalidou Koulibaly’s goal not enough for Graham Potter’s struggling side

Fulham celebrated a first win over local rivals Chelsea in almost 17 years on Thursday, with their 2-1 victory at a bouncing Craven Cottage moving them up to sixth in the Premier League and heaping the pressure on Blues boss Graham Potter, who saw new loan signing Joao Felix sent off on his debut.

It was Chelsea old boy Willian who got Fulham up and running after an encouraging start from the visitors, firing in (25) with the help of a deflection against the side where he spent seven years of his career.

Fulham had already had a penalty appeal waved away and struck the bar through Bobby Decordova-Reid by that point, with Chelsea’s defence clearly low on confidence, but Potter’s men struck back at the start of the second half when Kalidou Koulibaly (47) forced the ball over the line after Mason Mount’s free-kick hit the post.

That looked set to provide Chelsea with the platform to go on and grab a morale-boosting comeback win – instead they would fall to a rare and hugely damaging defeat to their neighbours. They now have six points from their last nine Premier League games, their worst run since 1996.

Felix had seemed destined to grab the headlines after being thrown into the starting line-up just over 24 hours after completing his switch from Atletico Madrid, with a fantastic first-half performance lighting up what has been a toothless Chelsea attack. But in the end, his first appearance will be remembered for a foolish studs-up lunge at Kenny Tete.

His straight red card on 57 minutes means he will now be suspended for three of the remaining 20 Premier League games of his loan period, compounding Potter’s problems on a night Denis Zakaria was added to their already lengthy injury list.

It was all smiles for Carlos Vinicius though as he ended a 10-month goal drought with a towering header the suspended Aleksandar Mitrovic would have been proud of to win it for the hosts.

Fulham’s rare win over Chelsea
This was only Fulham’s fourth win in 53 top-flight matches against Chelsea, with tonight’s win ending a run of 20 Premier League games without a win against the Blues since a 1-0 win in March 2006.

At the halfway stage of this campaign they have already surpassed their points total from their last stint in the Premier League and may even be dreaming of qualifying for Europe.

For Chelsea, those kind of ambitions seem a long way away. They stay 10th, 10 points off fourth-placed Manchester United who have a game in hand and their next London derby, at home to Crystal Palace on Sunday, is surely now must-win for Potter.

Player of the match: Andreas Pereira

How Fulham recorded a rare win over Chelsea
It had all started encouragingly for Chelsea, with Felix instantly sparking their attacking play into life. Within two minutes he’d nutmegged Tim Ream to set up Kai Havertz for a blocked shot which led to Lewis Hall wasting a follow-up. By the quarter-hour mark the Chelsea fans were singing his name, with Antonee Robinson and Andreas Pereira both in the book for bringing down the stylish, dangerous, roaming forward.

But for all the added impetus Felix brought to Chelsea’s attack, their lack of belief at the back was plain to see and proved to be their undoing.

Team news
Fulham made six changes from their FA Cup win at Hull, with Bernd Leno, Kenny Tete, Tim Ream and Antonee Robinson returning to the defence, while Joao Palhinha and Willian were also brought back in. Aleksandar Mitrovic was suspended.
New Chelsea loanee Joao Felix went straight into the starting XI, as one of four changes from the FA Cup defeat to Man City. Thiago Silva and Cesar Azpilicueta also came in as Graham Potter switched to a back three formation, while Denis Zakaria swapped in for Jorginho. Conor Gallagher, Hakim Ziyech and Bashir Humphreys also dropped out.
Fulham saw a penalty appeal waved away when Zakaria bundled into Vinicius and smashed the woodwork through Decorova-Reid when Trevoh Chalobah miscued a header amid an error-strewn performance. They finally hit the net through former Chelsea man Willian.

Cesar Azpilicueta should have known his former team-mate well enough not to let him step in on his right and Chalobah should have done better with his attempted block, which deflected the ball in off the post beyond Kepa Arrizabalaga. But Fulham’s supporters behind the goal didn’t care one bit and revelled in taking the lead against their neighbours who they last beat in March 2006.

Chelsea, who had scored just three in their past seven fixtures, had opportunities before the interval to level, with Bernd Leno denying Felix twice, either side of another good opening for Hall but after what would have been an uncomfortable half-time break, they came out firing in the second half.

Within two minutes of the restart they were level, with Koulibaly forcing the ball home after Mount’s free-kick hit the frame of the goal. A turnaround looked to be on the cards. But within the space of another two minutes Potter was left cursing his luck once more, with Zakaria limping off and then Felix sent off for stretching for the ball after a poor touch and catching Tete’s shin.

The games Joao Felix will miss through suspension
Crystal Palace (h)
Liverpool (a)
Fulham (h)
Potter looked bewildered by his bad luck in the dugout and while his 10-man team initially pushed forward they were caught out by Pereira’s deep cross which allowed Vinicius to shake off his markers and nod home with Kepa nowhere.

A quadruple substitution from Potter couldn’t inspire a second Chelsea equaliser, despite Azplicueta going close and the excellent Leno deny Havertz again, and a jubilant Fulham celebrated just a second win over Chelsea in their last 31 attempts. A rare triumph for the hosts – but a now all-too familiar painful feeling for under-pressure Potter.

Potter: It’s really frustrating, we’re suffering
Chelsea boss Graham Potter: “It’s really frustrating, incredibly challenging. I feel for the supporters. We’re disappointed to lose tonight. I felt it was a relatively even game in the first half, we had a couple of chances. But I think the basics we can do a little bit better, in terms of our defending and football actions. We get back in the game and the red card is where we’re at at the moment, in terms of things that can happen to us [do happen to us].

“To lose Joao for three matches is really disappointing. Joao is a young player, a top player, you can see his quality and there wasn’t any malice [in the tackle] but the ref has a decision to make. He’ll learn from it.

“More than anything fantastic from the opponent it was more our basic actions where we have to do better.

“We are suffering at the moment. We’re suffering, the fans are suffering. We feel for them. It’s important to stick together and try to get through this tough period.”

Silva: A special night – but we have room to improve!
Fulham boss Marco Silva: “It was a great night for our fans, after 16 years they deserve it. Chelsea are a massive club, their budget is completely different, we can’t compare anything but with our work, strategy, identity we could do it and we did it.

“For our football fans it’s special. I felt it after the final whistle in that moment, the way they celebrated with our players. A really important moment. Another three points for us – and I know in Premier League all the points are really tough to get.

“It’s been a fantastic season so far for us, but we know we’re just in the middle of the season. I still see a big room to improve. This is one of the positives I take from the game. We won the game, but big room to improve and we’ll keep working hard with our players.”

Stats to sum up Chelsea’s troubles
Chelsea have just 25 points in their opening 18 Premier League games this season, their fewest at this stage since 2015-16 (18), going on to finish 10th that season. Their 21 goals are their lowest after 18 games since 1995-96 (17).
Graham Potter is the first Chelsea manager to have two separate runs of three consecutive defeats in all competitions since Glenn Hoddle, who was in charge between 1993 and 1996, with today just Potter’s 19th match in charge of the Blues.
Chelsea’s João Félix became the first player to be sent off on his Premier League debut since Federico Fazio in October 2014 for Spurs vs Man City, and the first ever player sent off on his Chelsea debut in the Premier League.
Willian became the 26th player to score against Chelsea in the Premier League after previously playing for them in the competition; Chelsea have now had the most such players score against them of any side in the competition.