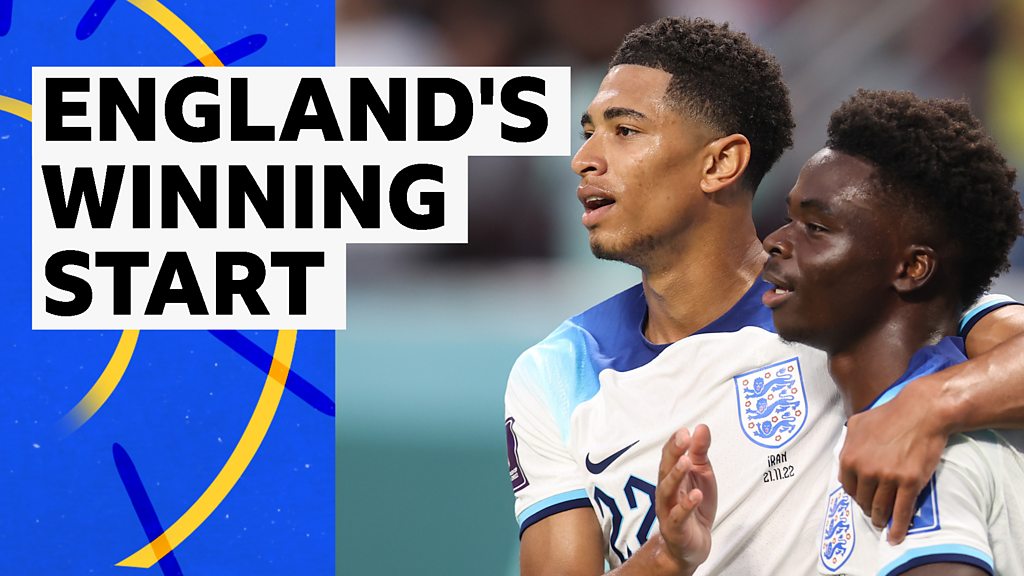 Bukayo Saka’s beaming smile as he stepped off the turf at Doha’s Khalifa International Stadium was a glorious reflection of an opening to England’s World Cup campaign that was close to perfection.

England’s 6-2 win against Iran must be placed in the context of just how poor the opposition was, Carlos Queiroz’s side not giving the merest hint of how they recently found their way into the top 20 in Fifa’s world rankings.

This should not, however, detract from a wonderful day for 21-year-old Saka, whose last appearance in a major international tournament was so cruel, the decisive miss in the shoot-out as England lost the Euro 2020 final to Italy in July 2021 bringing first tears then racist abuse.

Saka has done so much since, particularly in playing a leading role in taking Arsenal to the top of the Premier League this season, that he is not exactly in need of redemption but it was a special moment to see this rare talent experiencing such joy on the global stage after his Wembley despair.

And it was a very different kind of greeting he received from manager Gareth Southgate, who consoled the crestfallen youngster at Wembley, as here he was able to share in the joy of a superb individual display.

Southgate’s plans, at least for the group phase, had been clear and the only mildly contentious part of his first team selection here in Doha was a preference for Saka ahead of another prodigious young talent, Manchester City’s Phil Foden.

It must have been a close decision but Saka has been at the top of his game this season and has demonstrated in previous performances that this level suits him.

Southgate’s decision was richly rewarded with a fine first-half strike high past Iran’s substitute keeper Hossein Hosseini, on for Alireza Beiranvand after he suffered concussion early on, to make it 2-0 then a composed stroke into the bottom corner with his left foot for 4-0.

Foden has a rich England career ahead of him but Saka’s excellence made sure there were no qualms about Southgate’s call.

Saka said: “I can’t describe the feeling. I am so happy and so proud. We got the win as well, so it is a really special day.

“I feel in a good place. I feel the support and love from the fans, the coaching staff and my team-mates. That is all I need. I feel ready to give 100% and I will continue to do that every time I put the shirt on.”

England manager Southgate also had a very good day. Not only did he watch Saka deliver but he stuck with Raheem Sterling and Harry Maguire and both made contributions, the Chelsea forward with a lovely strike from Harry Kane’s cross to make it 3-0 before half-time.

Maguire was solid, almost scoring with a header that hit the bar, but struck the only worrying note of England’s day when he was substituted after appearing to be tested for concussion.

Kane did not get in on the goalscoring act as he stands three away from beating Wayne Rooney’s record of 53 goals for England but Southgate and his captain will hope that is being saved for a tougher day.

It was only the second time England have scored six in a major tournament, the first time also coming on Southgate’s watch in Russia in 2018 when Panama were beaten 6-1.

Of course, this being the Qatar World Cup, no day or game would be complete without a political backdrop of some shape and sure enough it came for both England and Iran.

Hours before kick-off, England were forced to back away from a plan to wear the “OneLove” armband promoting diversity and inclusivity under threat of a Fifa sanction for any player displaying the gesture of support.

And while there was little of significance for Iran’s many supporters inside the stadium on the pitch, they joined their players in making a powerful statement regarding their grievances and highlighting the growing human rights protests against the regime in their homeland.

The Iran national anthem was shouted down by fans and none of the Iran players joined in. They were clearly determined to make this day count even if it did not bring them the sporting outcome they wanted.

On the field it was England’s day, the rout started by a magnificent Jude Bellingham header, the 19-year-old looking every inch the player expected to make a huge impact at this World Cup.

And as the good news piled up for England and Southgate, Marcus Rashford scored with virtually his first touch after coming on as substitute, while another replacement, Callum Wilson, showed real selflessness to pass up a presentable scoring chance to set up an easy finish for Jack Grealish.

England took the acclaim of the fans before joining their families in the stands after the final whistle.

It will get much tougher than this against the United States and Wales in Group B but England and Southgate could not have asked for more – especially from the outstanding Saka.

England’s Fifa World Cup campaign opened in thoroughly convincing fashion as they outclassed Iran in an incident-packed match in Doha.

Gareth Southgate’s side strolled to victory, with Iran’s hopeless plight made worse by the early loss of goalkeeper Alireza Beiranvand to concussion after a clash of heads with team-mate Majid Hosseini.

Jude Bellingham got England off the mark in this World Cup with a soaring header from Luke Shaw’s cross 10 minutes before the break and the game was wrapped up before half-time thanks to Bukayo Saka’s fine strike and Raheem Sterling’s classy volley with the outside of his foot from Harry Kane’s cross.

Saka got his second before Iran’s supporters were given a moment of real delight when Mehdi Taremi scored a fine goal after 65 minutes – but England substitute Marcus Rashford then netted another smooth, composed strike with his first involvement.

To put the gloss on an incredibly dominant display, Jack Grealish slotted home from close range after a good run and pull back by Callum Wilson.

Iran did pull another back in injury time when Taremi slotted in a penalty after a John Stones foul.

The game was played out against the backdrop of more off-field controversy here in Qatar after England were forced to ditch plans to wear the OneLove armband promoting diversity and inclusivity under threat from Fifa of players being cautioned should they carry out the gesture of support.

Bellingham & Saka show class
It is almost impossible to deliver any firm judgement on England’s World Cup prospects given the paucity of Iran’s opposition but this could hardly have gone better for Southgate as his one major selection decision reaped a rich dividend and the result was almost perfect.

Iran were expected to provide stern resistance as they reside in the top 20 in the Fifa rankings and have a recent victory against Uruguay on their record but England made light work of the task once Bellingham gave them the lead.

Bellingham is being touted as one of the big emerging names at this World Cup, the 19-year-old Borussia Dortmund star already a target for a host of the game’s elite names.

And, even in the context of this game, Bellingham showed exactly why as he joined Saka as the dominant force in this game, scoring his first England goal with a magnificent header and bestriding midfield with a complete authority that belied his years.

This was only the second time England have scored six goals in a major tournament but on this evidence you would not bet against the brilliant Bellingham being involved the next time it happens.

Bellingham is a player with the world at his feet and a long career ahead of him at international level.

Southgate picked Saka ahead of Manchester City’s Phil Foden, the only mildly contentious decision in his line-up, but there can be no arguments after a hugely impressive performance from the 21-year-old who has played such a big part as Arsenal head the Premier League.

Saka scored twice and was a threat throughout and thoroughly deserved the warm applause he received when he was substituted.

It will get harder for England as they now face the United States and Wales but this was the perfect start.

Iran outclassed but send message
Iran suffered the early setback of losing goalkeeper Beiranvand to suspected concussion but this was never going to change the course of the game give the chasm in class between the two teams.

Iran coach Carlos Queiroz hinted at a bold approach beforehand but this was never going to be the case and once the game settled down following an opening 20 minutes littered with interruptions, this opening World Cup game was only going one way.

Iran’s many fans had a moment of real joy when Taremi thumped home his finish but there was little else to celebrate in this game as their team took a heavy beating.

This was not a day without great significance, however, as both Iran’s players and supporters used this global stage to make their feelings clear about the growing human rights protests against the ruling regime in their homeland.

The national anthem was shouted down by the supporters and none of the Iran players joined in.

Iran were heavily supported inside the Khalifa International Stadium and clearly regarded this as an ideal platform to make their grievances clear. The football itself gave them few moments to cheer but they were clearly determined to make this day count.