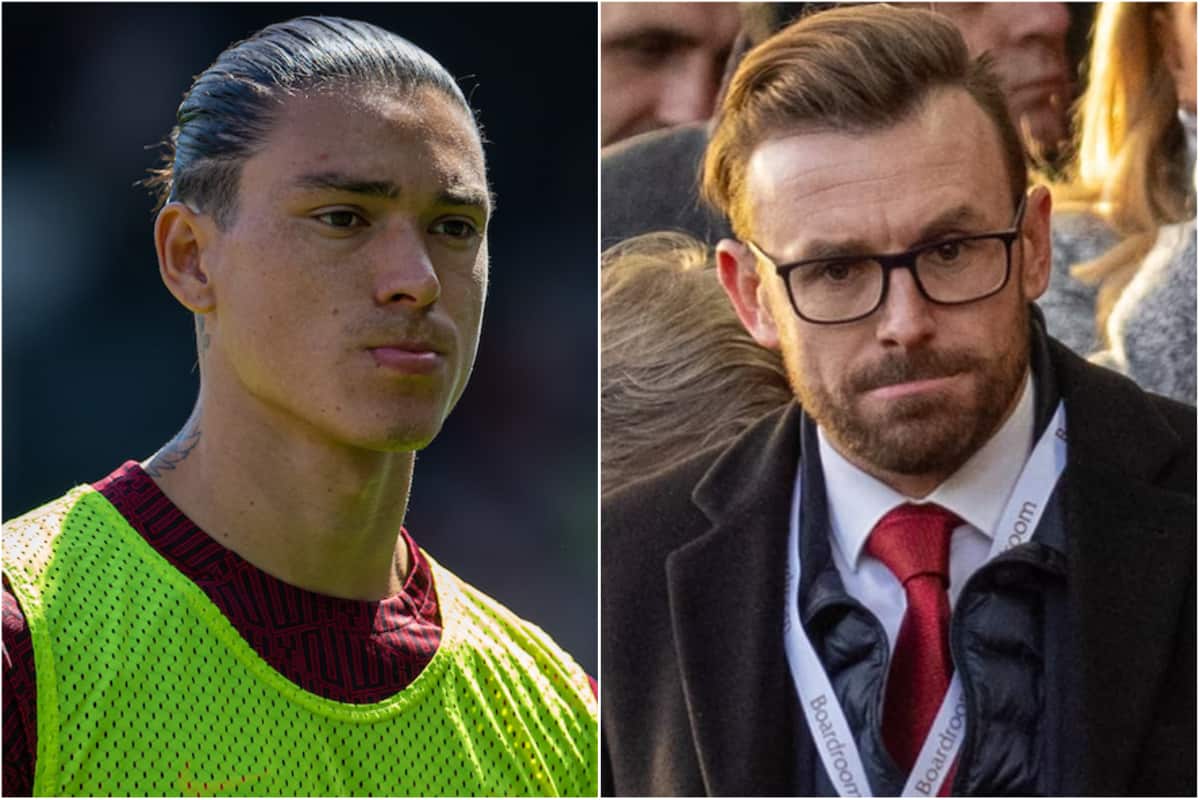 The Liverpool horizon is changing and not just with prospective owners, with news on Thursday that key senior figures in the recruitment team are also heading off.

Thursday brought the end of the first round of group stage games in Qatar; we’ve seen every nation once and can begin making sweeping conclusions about everything we’ve decided based on 90 (+12′) minutes of expertise.

The opening game brought a single goal and in football’s patented ironic way, the matchwinner for Switzerland was the man born in Cameroon, Breel Embolo. Probably not enough on show from either side there to be massively impressed or concerned about their impact late in the tournament.

Darwin Nunez started wide left (and very deep), before going more central later on. He missed a couple of decent opportunities, failing to make contact from close range, but also showed some great endeavour, dribbling and furious stares at the officials.

Fede Valverde almost won it with a late rocket, but in truth both these nations are capable of a lot more.

Then it was an hour of huff, puff and constant comments about Cristiano Ronaldo, who was off the pace and wasteful – until he scored a penalty. Suddenly he had “written his own headlines”, somehow, and the match went from lame to lunatic with five goals in the final 25 minutes.

Almost perfectly, a mad moment at the end so nearly resulted in a 3-3, before an even madder bit happened and it remained 3-2. Goalkeeper lucky, striker unlucky.

Lastly, it took some Vini Jr speed of thought and feet and some unerring Richarlison finishing to serve up a decent end to the day, Brazil establishing themselves as one of the several who look capable of great things early on.

Well, we already knew it might be the case that Liverpool FC have new owners at some stage in the near-ish future. But now those below the very top level of the hierarchy are also set for change.

Julian Ward, the new director of football only in charge since Michael Edwards’ departure in the summer, is set to leave the club at the end of the 22/23 campaign.

It was expected that Ward’s gradual takeover of Edwards’ duties was paving the way for another long stint at the helm, so this development leaves the Reds’ transfer dealings for next year looking uncertain at best.

And that’s not all: Ian Graham is also leaving, with the Reds’ head of research handing in his notice.

Graham has been pivotal in the data-driven analysis and recruitment scene at the club and it appears an entire overhaul of the transfer decision-making process could be forced in as a result.

If you opted against watching (or were working, or studying, or asleep…) Uruguay’s match, you’ll have missed former Reds midfielder Danny Murphy pondering one of football’s less-existential questions and arguing for change. Quite weird change though, to be honest, and not one many agreed with, largely on the grounds that it would be completely incorrect…

Is Danny Murphy really trying to argue that hitting the post/bar should count as an effort ‘on target’, on BBC One? “Maybe it’s just me,” he adds. Yes, it’s just you.

I don’t know Danny Murphy, why ARE shots not on target not counted as on target?

Danny Murphy having to have shots that hit the woodwork not being on target explained to him like Ted explaining the cows being small/the cows being far away to Dougal.

For the Liverpool look, naturally there are the ex-Reds with Wales, Ward, Williams and Wilson. No Mane for Senegal or Gini for Netherlands, but big Virgil will be back with the Oranje’s armband and looking for a second clean sheet.

And then in the late game, we’ll see if either Jordan Henderson or Trent Alexander-Arnold get a taste of World Cup action – probably not from the start for either, but perhaps off the bench later on.